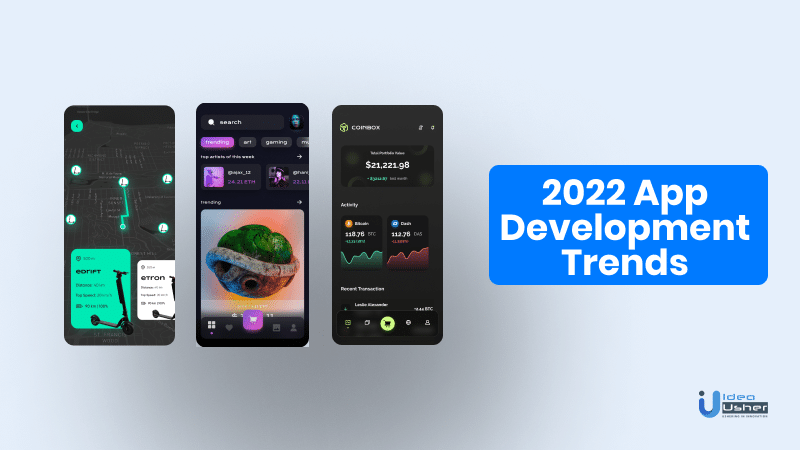 So let’s take a look at the top takeaways of mobile apps development trends 2022.

Apps that were not as popular before the pandemic has made a huge impact on user behavior, like contactless payment, online dating, video calling, blockchain and dApps, and some of the few apps in trend.

It’s crucial for an entrepreneur like yourself to stay abreast of app development trends and leverage them for a better future.

These Are the Mobile Apps Development Trends in 2022

As users worldwide get used to app interaction using voice, tech giants will continue to improve it. It will better integrate various aspects of their users’ lives together.

The presence of these devices in every home is a common sight nowadays. It only advocates the case for the rising number of apps using a voice user interface.

Although voice is not currently used much when shopping, it will grow at a tremendous rate. VUI use will surge from a current $2B to $40B in 2022. This is a 1900% increase, and they won’t predict that without solid plans of backing it.

Biometrics authentication is being used in mobile apps like PayPal and Apple Pay to offer another layer of security to the user’s data.
We will definitely see increasing use of biometric technology even in stores, like virtual try-ons, biometric approved payments, etc. These technologies are expected to shape the mobile cyber security space for the coming year.

Sectors like fintech, ed-tech, retail, and healthcare will all benefit from the incorporation of biometric identification. It can even be used in the KYC process for various mobile apps that have KYC as a mandate for registration.

Instant apps are a way for users to try out various apps without actually downloading them to the device. This offers users a good idea of which app is most suitable for their requirements. They won’t require extra space in their device to try out different apps.

Instant apps will lay emphasis on better design as not impressing the user might mean a lost download. They will improve the app experience almost to the tune of a downloaded game so that the users voluntarily choose the apps while trying them out.

This definitely makes the list as one of the mobile apps development trends of 2022.

Mobile wallets have mushroomed since the lockdown with greater emphasis on contactless payments. Digital wallets like PayPal and Apple Pay have seen an increase in users after the Pandemic.

The US is looking to implement UPI, and interestingly Google Pay is amazed by the unlikely success of such a system in India. Real-time payment systems have entered markets like India, with BHIM UPID (a popular real-time payment service) showing over $1T worth of transactions in the year 2021.

Sources such as prnewswire.com suggest that the mobile wallet adoption rate is set to increase to 75% by the year 2025.

Artificial intelligence has already made its way into everyday apps like Snapchat, Instagram, etc. Machines are getting better at recognizing people and interpreting their language easily.

AI devices like Apple’s Siri or Google Assistant also play a major role in this shift. AI also heavily depends on what you intend to use it for, like smart filters, voice recognition, dynamic filters (like those used on Instagram reels), etc.

This technology can also be used to detect faults in machinery just by making it listen to its sound. There might be a slight change in the sound of the machine that the human ear can’t detect but, AI can.

Social media algorithms are using AI to optimize their software every day in order to make it more and more profitable.

All these uses of AI will continue in 2022 and in the years to come. This definitely makes it to the list as one of the top mobile apps development trends of 2022. Learn how to build an AI application in 2022.

Blockchain and dApps have come in the spotlight in 2021 and will start to dominate the market in 2022. Decentralized apps or dApps will use blockchain technology to operate in a decentralized manner without the control of any central entity.

Although most current dApps are open-source, fully closed-source, or partially closed source apps are emerging in the market as the crypto industry develops.

Customer acquisition and retention in the dApps space is the main challenge as of now. But, with innovation and creative problem-solving, this issue can be fixed in 2022, making dApps one of the hottest trends in 2022. However, much will depend on how governments across the world adopt blockchain-based solutions.

Blockchain technology can also be used to make secured payments from person-to-person, person-to-merchant, merchant-to-person, or even merchant-to-merchant. These transactions are recorded on the blockchain network, and open ledgers are created that cannot be hacked. This makes it one of the most secure modes of payment as of 2022.

Augmented reality and virtual reality are increasingly becoming a part of the digital ecosystem. Facebook’s recent rebranding to Meta has put a spotlight on metaverse technology. This includes both VR and AR.

The AR and VR market is estimated to reach a whopping $300B by 2024 according to statista. The metaverse blurs the horizon between the digital and the real worlds, merging them into a unified seamless experience.

VR and AR have already made staggering progress when it comes to gaming and entertainment. It will set our perception of the mainstream in the coming years. Big companies like YouTube, Google, Facebook, Apple, Sony are actively trying to incorporate VR and AR into their ecosystem. Users are also beginning to realize the tectonic shift sitting at their homes.

In Mark Zuckerberg‘s words, “In order to unlock the potential of the metaverse, there needs to be interoperability”.

He has also clearly indicated the merge between web 3.0, VR/ AR, and blockchain would create the metaverse. Thus, it can be that AR & VR will significantly influence the mobile apps development trends 2022.

5G technology already announced its presence in 2021. It will carve out an even bigger pie and dominate the market by the end of 2022.

This new era of telecommunications will step up the average internet speed of 25 Mbps in 4g to 200-400 Mbps in 5G. It will make a stark difference in how we use and perceive the internet.

It is no surprise that apps, games, events, and hardware will shift very quickly to the 5G network and not lose momentum. The Metaverse will also heavily depend on the 5G network.

The network will also allow us to harness the power of the internet of things further and interconnect hardware, software, cloud, reality, and virtual reality together. Making the experience seamless and unified.

Headless eCommerce systems will revolutionize how retailers sell their products and services online. A headless system means modifying and changing the front-end without affecting the back-end.

This gives immense scope to companies to go through multiple designs within a short period of time to see which one works the best in terms of conversion of leads. A headless system will give rise to a new dimension of eCommerce, which is simple and seamless to the users.

The headless architecture passes requests between the presentation layer and the application layers. Most retailers haven’t started using it yet. But, big retailers like Amazon are already using it to increase their revenues massively.

For example, a headless system speeds up the app to the website, thus cutting downloading time. This saves Amazon a lot of money. Amazon says that one extra second of loading time costs them over 1.6 Billion USD.

According to slatwallcommerce.com, as many as  47% of online consumers expect a page to load within 2 seconds. Moreover, 40% will abandon the website if it doesn’t load in 3 seconds.

The use of Headless eCommerce will definitely increase in 2022. Retailers are expected to realize the importance of a fast website/ app, which impacts sales directly.

Virtual events are becoming popular modes of entertainment in 2022. Starting from YouTube live programs to Metaverse concerts like that of Ariana Grande or Travis Scott.

These events host an international audience. Thus, the scope of companies trying to market their products in the metaverse is immense.

In August of 2021, Ariana Grande also hosted a Fortnite concert and has generated almost the same revenue as Travis Scott. Recently, Justin Bieber has partnered with a virtual entertainment company called Wave to host live concerts.

Bieber (also an investor in Wave) has recently said:

“I am a big believer in Wave and love the platform as a new way for me to engage with my fans”.

The revenue generated from the Fortnite association of Travis Scott, including merch sales is around $20 Million. Which is a considerable amount, considering that the Astroworld tour generated nearly $53 Million.

The NFT merch business will take off with the rise in popularity of such shows in the virtual world. And, companies will try to capitalize as much as they can on the same.

The trends in the mobile app development sector will cumulatively influence the entire app industry. So before you commit to developing an app for your business, you need to take a look at the above-listed technologies. And check the ones you might need.

There is a good chance that your business will flourish by the implementation of new technology apps. But it is certain that a business will perish without using more recent technologies.

Technologies like AR/ VR, blockchain, AI, and ML will be essential tools. Basking in these trends will help you rule the industry you have stepped in, notwithstanding the competition!

The team has access to all the necessary tools and resources required by your project. With a reasonable budget, you can develop the best mobile application with us.

You can contact us if you want to build a mobile app that will dominate the market in 2022.

1. Can developing an app make you rich?

4. Which apps can I use to detect the speed of my 5G network?

You can use apps like Speedtest by Ookla, OpenSignal, 5G Mark, and other such apps to detect a strong 5G connection.

5. Which apps are already using VR and AR?

Apps like Pokemon games, Snapchat lenses, gaming headsets, etc all use VR and AR currently and the trend is growing with time.