Have you ever been listening to a song on the radio, YouTube, or even in a store and did not know what the song was? Well that is where Shazam app comes into play.

It allows users to point their phone at audio and it is able to recognize names, places, and times of those audio streams. Shazam is an app that has become extremely popular in recent years.

This popular music recognition app has been downloaded over a billion times for both Android and iPhone. So what are the secrets to this app’s success?

What steps did it take to be one of the most famous music recognition apps in the world? And how to create an app like Shazam?

Let us find out the answers to these questions in this blog!

How does Shazam API Work?

Have you ever wanted to create your own app like Shazam? There are a lot of apps out there for finding information about music, but none like Shazam. What makes it so different from the rest?

People love it because it’s simple and easy to use. You just have to tap the screen and let the app listen in on what’s playing nearby. The app then matches the music with a database of songs, artists and lyrics.

To be able to create an app like Shazam, you need to learn the API and understand some other specific things.

Ever wondered how the Shazam API works? To learn more about it, keep reading ahead!

To sum up the process, have a look at the following steps to learn how the Shazam app works.

So that was all about how Shazam API works and how the app actually processes to find and recognize the user recorded audio from its database.

How Do You Clone Shazam? 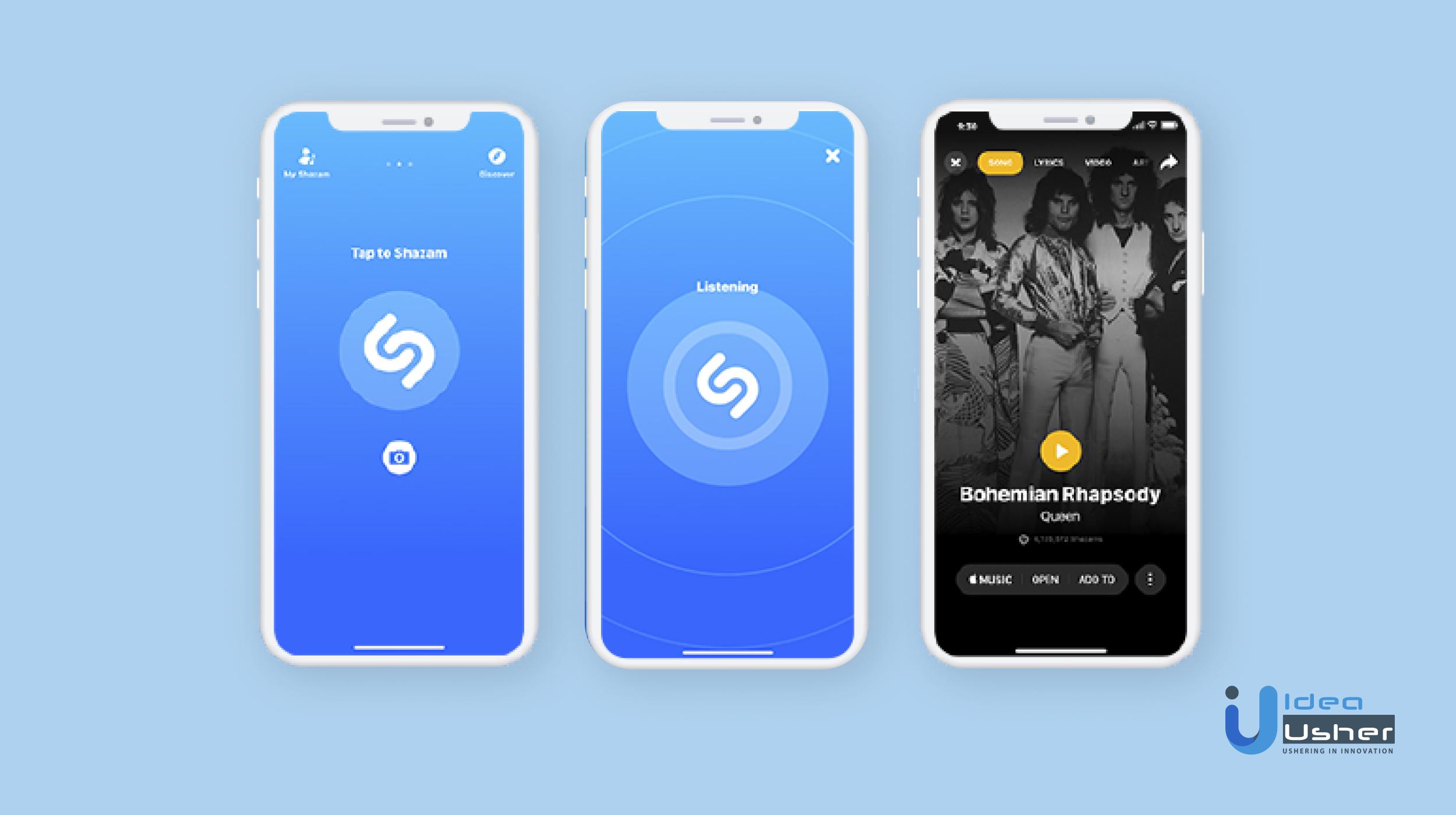 How to create an app like Shazam? Let us talk!

There is a lot to consider when bringing a new app into the world. No matter what the app will do, you need to make sure your development team thinks about all of the details involved in the process. Here is how to create an app like Shazam.

In this blog segment we will closely understand all the steps to build a music recognition app like Shazam. So let us begin!

App business market is extremely competitive. According to a Statista survey, as of the 4th quarter of 2020, there were 3.14 million apps listed on the Google Playstore. Thus, these numbers clearly depict the vastness of the app market.

The only way to establish a profitable app business is by extensive market analysis and research. Thus, one must research and learn thoroughly about the music app recognition industry before actually stepping into it.

Creating a solid business model is one of the most important steps to establish a profitable and long running app business.

The business model of your music recognition app must contain two things:

Check out this blog to know why outsourcing is a better approach for web and app development.

It is one of the most underrated steps of any app development process. Rigorous app testing is the key to a highly productive and efficient app. Additionally, you have to ensure that your app is free of any bugs and any minor or major complications.

Henceforth, it is often recommended to hire a QA engineer to test your app. Furthermore it increases your app’s efficiency and user experience.

The fifth and final step is to launch the app. It is extremely important to advertise your app especially before and at its launch. One can do so by launching marketing campaigns across all the social media platforms.

So this was all about the development process of a song finder app like Shazam. Now let us have a look at some of its top features.

How Does Shazam App Make Money?

Digital sales is the primary way by which Shazam makes money. Whenever it identifies a song it gives an option to buy it on iTunes to its users. And this is how it generated revenue through third party sites.

And that is how it earned millions of dollars through digital sales.

The second way by which Shazam earns money is through user data. However, it is not a direct source of revenue for Shazam rather a passive source of income.

Since Apple has acquired Shazam, Apple is using this vast user data to increase its sales and leads. Which in turn brings a lot of money to Shazam.

So that was all about how Shazam earns money without actually charging its users.

The eternal question for smartphone users… (for us, at least). Which music recognition app is better – Shazam or SoundHound? Is there even a difference? Let’s find out.

These two apps allow you to identify a song that is playing in the background. Both Shazam and SoundHound are great mobile applications for you to use on your phone. They will allow you to discover new music around you or by name.

Some of the tops features of SoundHound include:

All these top features makes SoundHound one of the major competitors to the Shazam app. However, Shazam has its own perks which makes it an amazing song finder application too.

Thus, to sum it all up it is pretty difficult to state which one is better. However, it usually depends on the users and their expectations with the sound finder app.

If you want a complete package that is a mix of both a song finder and song streaming platform SoundHound is the better option.

But that does not mean Shazam is any less than SoundHound. Shazam has features like auto Shazam, visual recognition option, etc which makes it a top choice for a song finder app.

Development costs of any application depends upon many factors. For example,

These were some of the major aspects that contribute to the app development costs. Now we have listed the generic market rates per hour and the various features and aspects of an app.

One can easily calculate the approx development costs of a music recognition app like Shazam using this table.

So this was all about the development costs of a sound recognition/finder app like Shazam.

Have you ever wished your business could be like Shazam, the music app? The app listens to a song or a clip of music, tells you what the song is called, and even gives you the option to buy it. Not only that, but Shazam is doing something profitable!

Unfortunately, creating an app like this takes more than just listening to music. It’s important to understand the numbers behind those pretty sound waves before diving into the world of music recognition technology.

Sounds intimidating isn’t it? That is where Idea Usher comes to your rescue!

Idea Usher is a leading software and app development company that designs web and mobile based solutions for you.

From design to development, we have got you covered!

Furthermore, we use cutting-edge technologies such as artificial intelligence, blockchain development, machine learning, and complement them with human-centric UI/UX design to offer solutions that are futuristic and result-driven.

Our services are not just limited to just designing and developing your app. We offer our services post your app’s launch too- like support and maintenance.

We will help you to form effective PR strategies to boost up your app’s performance and its ROI in the market.

What are you waiting for then? Contact us today to get your dream project started!

We hope you like our blog- How to create an app like Shazam? Shazam app is one of the best music recognition apps in the market. No doubt, music lovers will be excited about this application.

Whether you are hearing a song on radio or anywhere, you open up Shazam and simply hold your phone to the sound. This application can easily identify it for you.

The moment you hear the song, it will show the information like album name and artist details.

To wrap it all up, Shazam is just a good smartphone app that can help you to recognize a song and name of the band. This app is really popular if you are looking for ideas for the best smartphone apps. Shazam also has other features too that makes it one of the best music recognition apps of all time!

Henceforth, it is an excellent idea to invest in building a music recognition app like Shazam. It will help you establish a profitable business with a lot of market growth. Although the market is pretty competitive, one surely make their way through it by implementing the right tools & strategies and using the right resources.

Yes, there are apps like Shazam for pictures too. For example, Google Lens, Snapplay, etc are some of the top image recognition apps.

2. What are other top competitors of Shazam?

Some top competitors of Shazam are SoundHound, TrackID, etc

3. Can Shazam identify songs playing on your phone?

Yes, Shazam can identify the songs playing on your phone by using sound recognition technology. It creates audio fingerprints out of the user-recorded audio and then matches their frequencies with the songs in its database.

4. What technology does Shazam use?