What is Spotify Greenroom App? 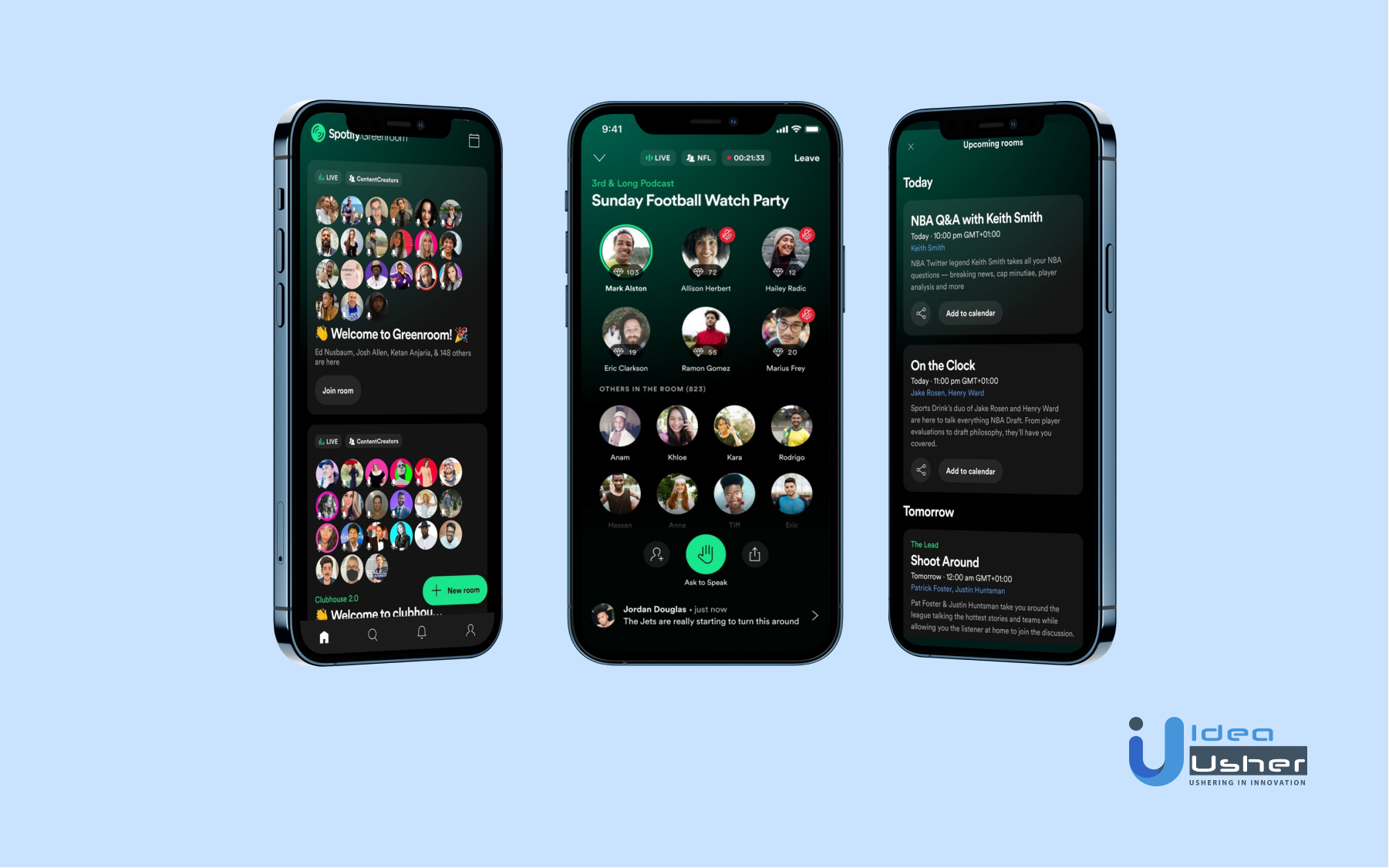 Greenroom app is a live audio based platform that allows users to host live audio sessions and podcasts on topics including sports, music, and culture. Spotify has recently launched the Greenroom app in more than 135 countries on android and iOS platforms. And it is said to be its take on the infamous Clubhouse app. Let us further understand what exactly is the Spotify Greenroom app and why is it creating a buzz in the market? Let us begin!

Spotify has recently announced the launch of its new Greenroom App. It is said to be the Clubhouse’s competitor. Furthermore, it is said to be Spotify’s take on the infamous Clubhouse app.

Spotify’s live audio app, Greenroom, has now finally launched on iOS and Android platforms in more than 135 countries. It is the company’s first attempt at creating a social media platform. Click To TweetThe social audio app, which is very similar to Clubhouse, allows users to host live sessions and conversations about sports, music, and culture.

We all know that Spotify is a magnificent music streaming app for iOS and android for users who buy premium memberships too. It makes music of every flavor accessible from every place imaginable. Spotify has come up with an app especially for the bands that will be able to allow them to host live podcasts and audio sessions to their audience.

In the next segment of our blog we have covered everything you need to know about the Spotify Greenroom app. So without waiting any further, let us begin with it!

What is the Greenroom App? 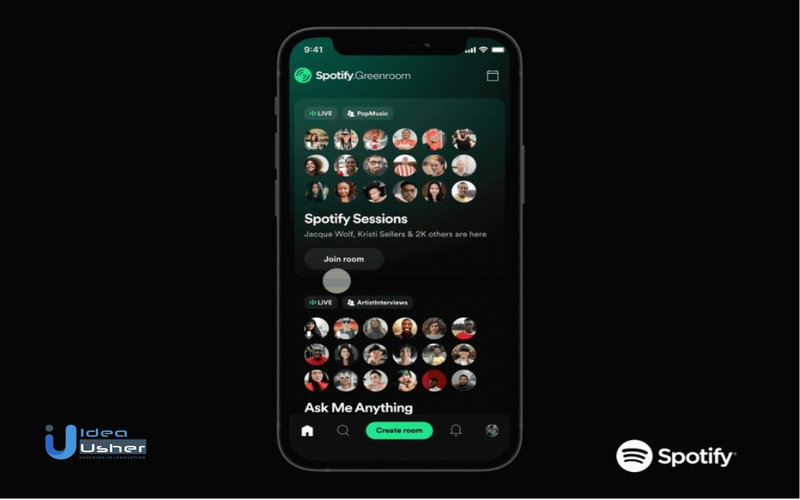 The Spotify Greenroom app is built on Locker Room, which was created by Betty Labs. However, Spotify later acquired it in March 2021. The biggest change after Spotify acquired the app was the change in the content.

Spotify Greenroom iOS: How to Download Greenroom App on iOS?

So that is how you can download the Greenroom app on your Android and iOS devices. In the next segment of the blog we will gain insights about the latest features of the Spotify Greenroom app.

How to create a group in Spotify Greenroom? 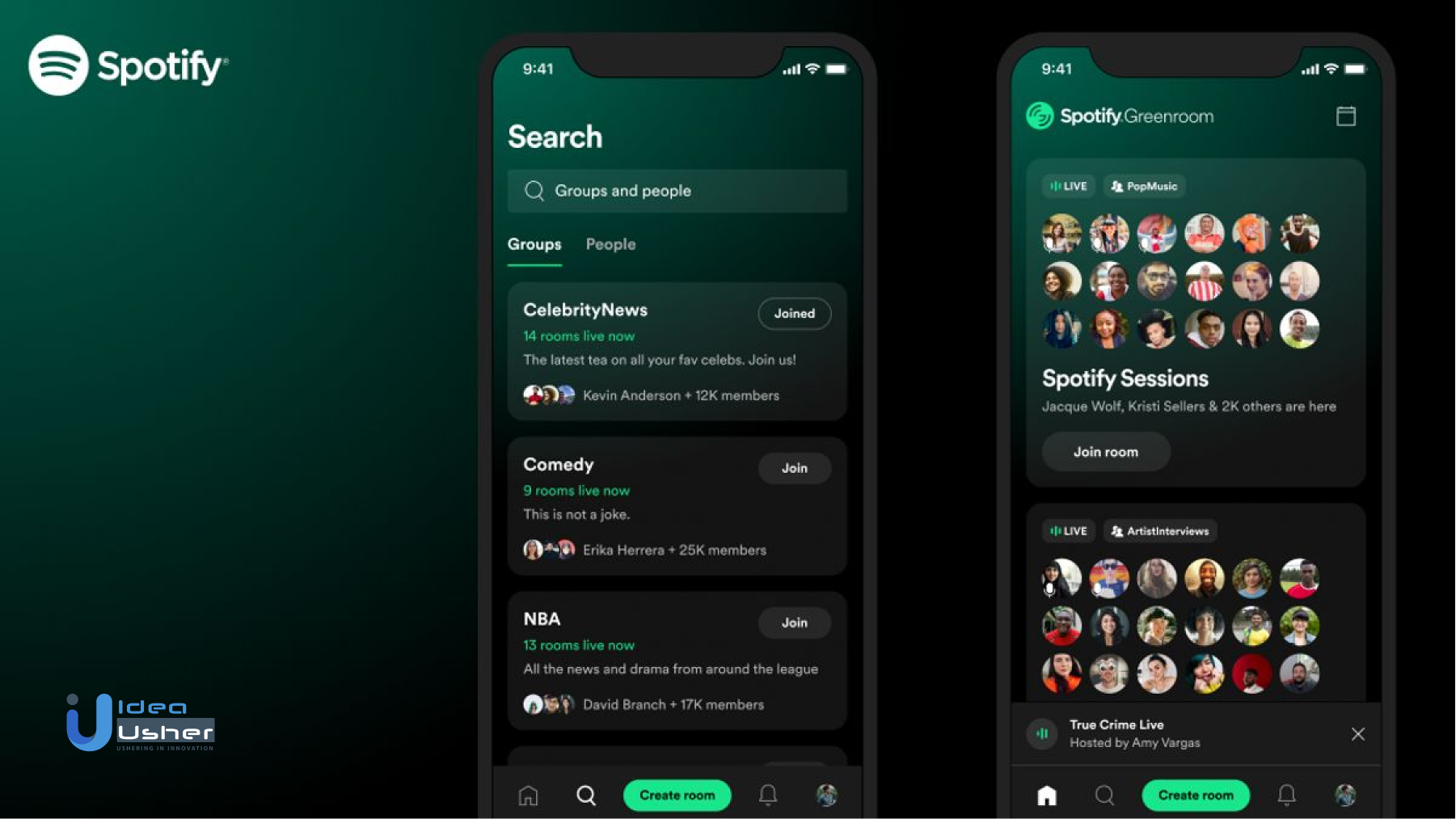 After witnessing the popularity and buzz of Clubhouse, Spotify, like many other companies, has also launched an app to rival the Clubhouse app. Spotify has launched the Greenroom App which aims at bringing together the top features of Instagram Live and the Clubhouse app.

There are many features in the Greenroom app which are similar to the Clubhouse app. For example,

To sum it all up, the Greenroom app is more or less similar to the Clubhouse and similar audio-based apps like Twitter Spaces. Spotify is planning to add many other features in the app as the app is still in a primitive phase.

Is Spotify a free App? or Is Spotify free on Android?

Spotify is a free app or rather we would say it is a freemium app. However in the free version their are ads. There is a premium version too. In the premium version users can enjoy offline, ad free music whenever and wherever they want.

Conclusion: Spotify Greenroom vs Clubhouse: Which is Better?

Now to answer the big question, which is better- the Clubhouse app or the Greenroom app? Well honestly both the apps aim at providing a highly interactive, audio-based, live platform to the users all over the world. Additionally, the other important goal of these apps is to help people learn from the experts about professional skills in a fun and interactive manner.

However, both the apps are still in their very early stages. There are many factors that make both the apps so similar and different at the same time.

The basic fundamentals of both the apps are the same. However, there are many aspects that make them a bit different from each other. To conclude, it is very difficult to compare them both on the basis of these aspects especially when both of them extremely new in the market.

To wrap it all up, both the apps are of the same niche, aiming at the similar audience. Henceforth, it will be very interesting to see how these apps will unfold their new features in the coming days.

Furthermore, it is important to know that the competition is rising day by day. There are many similar apps like Facebook’s Hotline app ready to launch in the market.

Thus it will be very interesting to note how these apps will accommodate and evolve themselves with the growing competition.

Choose Idea Usher to Build an App like Spotify Greenroom

How to create an app like Spotify Greenroom App? Well it’s simple! Choose Idea Usher to build your dream app like Greenroom. Idea Usher is a leading software and app development company that designs web and mobile based solutions for you.

From design to development, we have got you covered!

Our team of the best developers and experts will guide you through each and every step of app development be it designing or the marketing of your app. We will cater to all your needs and requirements to produce the best customized solutions.

Furthermore, we use cutting-edge technologies such as artificial intelligence, blockchain development, machine learning, and complement them with human-centric UI/UX design to offer solutions that are futuristic and result-driven.

Our services are not just limited to just designing and developing your app. We offer our services post your app’s launch too- like support and maintenance.

We will help you to form effective PR strategies to boost up your app’s performance and its ROI in the market.

What are you waiting for then? Contact us today to get your dream project started!

We hope you like your blog- What is the Spotify Greenroom app? With the advancements in the digital world, live audio apps like Clubhouse and Greenroom app are becoming highly popular these days.

Companies like Facebook, Discord and Spotify are testing various apps to rival the infamous Clubhouse app. Thus the fact that there is so much potential and definitely a BIG money in these apps is not hidden anymore.

Today their development is more relevant than ever before, thus it is the best time to invest in developing similar apps.