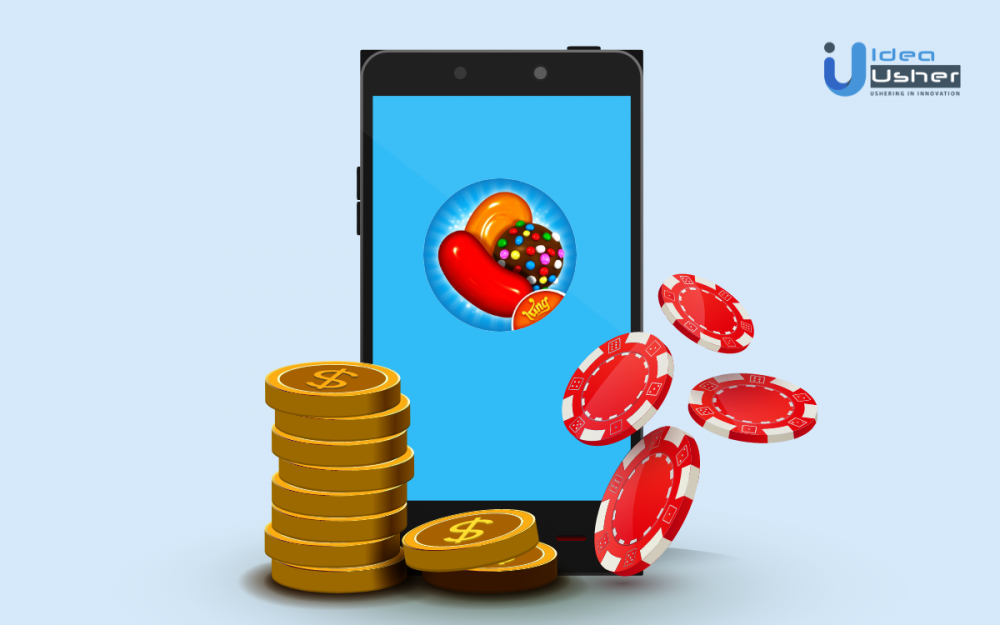 King’s popular Candy Crush series have made a profitable income over the years. The candy crush revenue has been revealed and according to Activision, it has been a profitable year for the company.

The latest financials revealed by the team showed that the annual revenue for 2015 dropped by a tenth. But the amount has somehow wound up to around $517 million. Meanwhile, the revenue was down to 12 per cent to $2 billion.  In this read, Idea Usher experts break it down to you, what made this game a huge success!

According to a new report, the game has made around $1.5 billion in 2018. Players spend around $4.2 million per day on Google Play Store to purchase the game. According to a market intelligence company, around 51% of players have stated that the game is nearly as addictive and the purchase is worth it. Keep reading till the end to find out exactly how.

The candy crush revenue is solely based on the developer’s smart thinking and a prompt way to promote the app. In the early years of social gaming, King came up with the idea of a new game. In-game advertisements and micro-transactions were part of the journey, which helped the game generate revenue.

Later, the game allowed the players to make in-game purchases. It helped them to get past a tricky level in the game. In order to win the legion of fans, the company took an abrupt decision. King decided to take out in-game advertising,

This activity was a massive success for the company. It peaked at 550 million users at the beginning of 2015. However, the game faced it’s a downfall as well. Activision Blizzard promoted games such as blizzard and World of Warcraft which were slowly gaining popularity.

The publisher saw a massive rise in stocks and revenue and the charts soared up to 740 million U.S. dollars in 2019. Surprisingly, music streaming app giant Spotify, was also on a roll around 2019.

The candy crush revenue was ten folds than what the publisher had seen in 2012-2013.

Since the launch of candy crush saga, the game indeed saw a rise in popularity over the years. The colourful puzzle game became an overnight sensation within fans. It was available to players on their smartphone, which made them more comfortable to play. Lucky time for gaming app developers, right?

The gameplay is simple and easy. Each player is given with a puzzle which they have to solve. They have to match with the candies which are similar, present on the other box. Once the player reaches the same candy, the boxes will clear taking the player one step ahead towards success.

While the game is free to play, there are options for in-game purchase present in the game. Players can make the purchase to improve their performance and gain better rewards. King’s micro-transaction revenue model paid off really well for the team.

Each player was spending around 1.4 billion U.S. dollars in 2018. Since the game was viral, the candy crush revenue per day was reaching new heights.

Features of the Candy Crush Game:

One of the best features of the game that the starting level is nearly easy to play. When starting the game, the players can pass off level 10-15 very easily without any help. Without losing their lives, players can surely top this game.

Another useful feature for candy crush is to help you generate more revenue as you progress. The players can unlock and check your progress and see how many rewards you can get from them. The players are completely aware of the future levels when they are using the map.

The game contains special candies which are known as charms. As players progress on their match and set new scores, the charms are activated. It helps the players to get around 50-60$ donated to their bank account linked. These charm candies are only unlocked when the players have surpassed most levels.

While there are chess and other action gameplays present on the Google Store, Candy crush is a winner too. It helps you to connect with different plates around the world. While you are playing on a level, you can compete with various other players. It will help you to compete and review scores.

Candy Crush Revenue Over The Years

The candy crush revenue over the year has been a rocky patch. The oldest game in the series, Candy Crush Saga, accounted for about 63% of the spending. It is nearly $945 million. The revenue of the game was up 10% compared to 2017. When it was first launched, the game garnered a ton of attention and slowly became a crowd favourite.

Meanwhile, Candy Crush Soda Saga accounts for 29% of the total spending. The candy crush saga revenue is the following in numbers:

The candy crush jelly saga has made a $90 million revenue and represented 6% of the franchise’s revenue in 2018. The latest franchise of the game, Candy crush friends saga had surpassed $3 million. The candy crush last level encourages all players to buy better items from the store for better gameplay.

For about 29% of the candy crush revenue, or around or around $443 million, in-game players’ purchases were increasing. The game even saw a rise in players and participants. Two hundred thirty million new players installed the game in 2018, though a total figure was not made available.

In comparison to the other games present in google play, candy crush still remains at the top.

Pokemon Go has made around $800 million from the in-game purchase. Candy crush beats the game at $945 million. Candy crush is an Activision franchise. The franchise has been known to release some of the most popular games such as Call of Duty. The company’s acquisition accounted for a staggering $5 billion when developer King took over the company.

An aspirer set to achieve my goals, I make sure my write-ups can touch hearts and help me to convey my thoughts to readers.