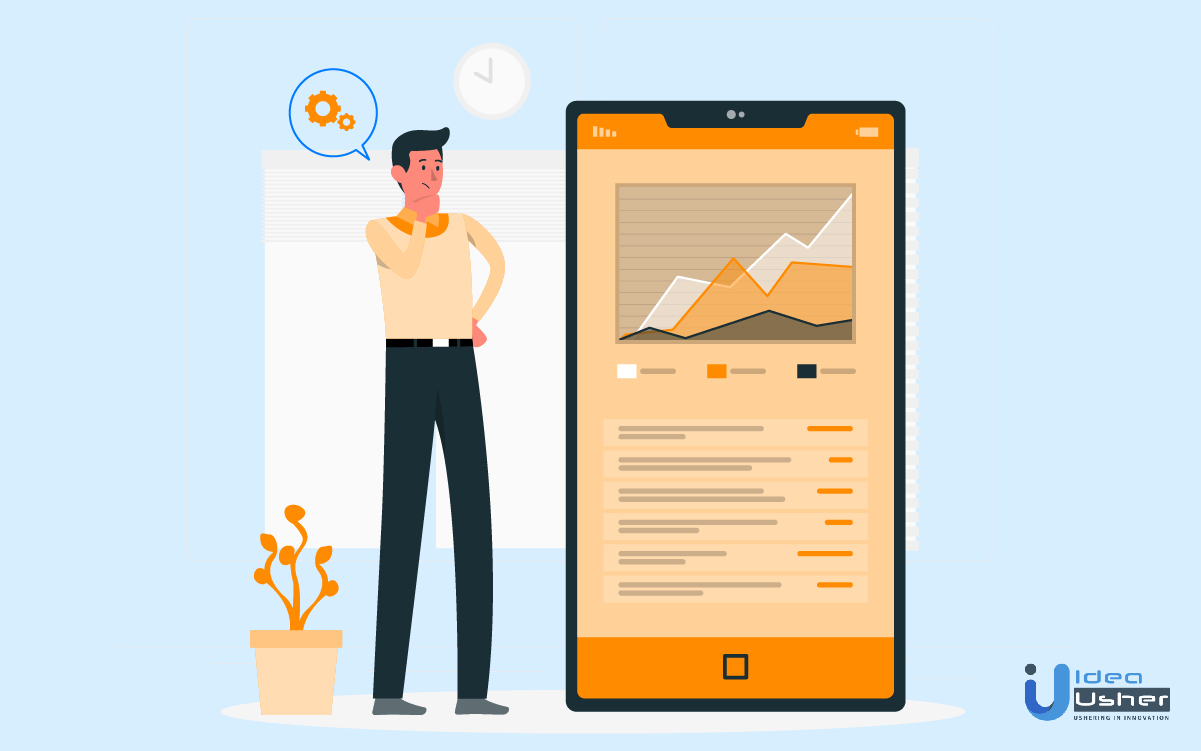 We believe that it is well established by now that the Mobile app development industry is thriving. As you are reading these lines right now, the app usage rate is slowly and steadily increasing. This rise is improbable to slow down in the foreseeable future.

So what exactly is the hype about? What makes a mobile app so attractive that it makes users drawn towards using them on such a heavy basis?

Today in this blog, we will answer these questions by overviewing the top mobile app usage & revenue statistics to know in 2021. Let’s begin!

In our Mobile App Usage & Revenue Statistics To Know In 2021 area, let’s start by reviewing stats about app usage and popular mobile app download habits. Using these stats, we can see what trends are going on in the apps market and understand user behavior.

After sneaking a look at the Mary Meeker internet trend report, it is safe to say that internet usage is seeing a rise. But the gap between desktop and mobile users is increasing. People apparently prefer using their phones as compared to desktops.

The difference between mobile app usage and mobile browser usage is also increasing. In 2020, studies showed that out of all the time spent on mobile, 88% of it goes on top apps rather than a browser.

If we analyze this, we can see that having a phone-optimized webpage for your business is simply not enough. If you want to be where the people are, mobile apps are the way to go!

While getting an app made, monetization strategy plays an integral role. It is natural that you entered this area to generate more money, but is making your app a paid one the best way to go?

If you look at the global trends, it will be immediately apparent that almost 98% of the app-generated income is coming from free apps download. There are only a fraction of people who are willing to pay for an app.

This does not mean that you completely dismiss the idea of creating a paid app. Whether to go for it or not depends on many factors.

Google Play witnesses more traction than the Apple App Store in terms of global downloads or the most downloaded apps. Apart from that, both the app stores encounter a significant rise in the download numbers every year.

If the pattern continues, then similar trends can be witnessed between 2020 and 2021 as well.

Android launches new apps in the market every month at a rate that is almost thrice as fast as Apple. Why so? The Google Play Store is reportedly easier and cheaper when it comes to app launches.

When building new apps, one key factor that should always be considered is what the consumer wants.

You may have invented a revolutionary app idea, but it will not be successful if there is no market for it.

Picking a niche belonging to popular app categories is a smart move. You can review the app store categories terms and choose a type that best suits your app idea.

Let us see the most popular apps categories so far:

7. Most of the users have at least ten apps downloaded

In a survey conducted at the end of 2019, nearly 75% of the respondents claimed they have at least 10-11 apps on their mobile devices (excluding pre-downloaded apps).

So while new apps may not be downloaded, users still access at least 10-11 apps on an almost daily basis.

However, app downloads are not the only thing that should be relied upon. If your app is not being used, the chances are incredibly high that it would get deleted in the near future.

8. The most common reason why apps get deleted

The number one reason why apps get deleted is that they are not used.

Do you ever go through your phone gallery or old text messages and start-off on a deleting spree?? The same can and does happen with apps as well.

Why the apps are getting uninstalled is what, as a business, you should be focussing on. Some of the top reasons include:

The aspects mentioned above (or something similar to them) result in poor user experience. A poor UX can lead your app directly towards failure.

As we have just read above, most downloaded apps get deleted due to low usage. Some of you may have already witnessed this; after the launch, your app took a surge in download numbers, but you are unable to make money as nobody is using the app!

It is a common problem among many app owners. But how to identify that it is happening to you? This is where retention and churn come in.

Retention rate: It refers to the number of customers you have retained in a particular span of time.

As per data, 71% of users uninstall an app after 90 days of downloading. What does that mean for your app?

You should stay on track with these metrics. You need to provide the users with a reason good enough to convince them not to hit the road.

A 100% retention rate is not possible. You need to stay active and develop new and creative ways to drive up your app downloads.

Although, during this process, keep in mind the interest of your existing users as well. Keep your app updated to provide them with the smoothest UX experience.

When looking at the top apps statistic, it becomes clear that Facebook is the winner by all means. Currently, Facebook messenger is the most downloaded app, while Whatsapp is the app with the most users.

We have already witnessed the difference between the Apple App Store statistics and the Google Play Store. But why does that gap occur? The users are different.

Different users behave differently. We can notice that below:

This revenue is generated by paid apps, in-app subscriptions, and in-app purchases.

While the gap between Google Play Store and the Apple App store may run in favor of Google, Apple takes the lead when it comes to purchases.

Google Play store purchases do see a rise almost every year. Despite that, Apple dominates the spending by nearly double.

So if you are looking at paid-app development, the Apple Play Store might be the right platform.

12. Most of the time is spent on communications app

50% of the time spent on apps by smartphone users goes to social media apps.

In the second place, we have video streaming apps (such as Netflix, Amazon prime, Tik Tok) by taking 21% of the app usage time.

But that does not necessarily mean that older age groups cannot be targeted. As we can see in the table below, more senior people also spend a significant amount of time using mobile apps.

As long as you target the right niche, you can alter and create an app appropriate for your target age group.

14. Data usage as an essential factor

Many users report that data usage is a major deciding factor in keeping/deleting an app.

Pokemon Go is a great example. The app was a significant hit amongst millennials after it got launched. But the minute they realized that it ate up a lot of data, they did not shy away from hitting the ‘delete’ button.

During development, ensure that your app uses fewer data.

Just like everything else, mobile app usage also depends on the location of the user.

In the past four years, app downloads have increased in China by 80%. Other countries that follow its lead are India, Indonesia, the USA, and Brazil. As these markets keep emerging, targeting global consumers would become much more accessible.

After reviewing the Mobile App Usage & Revenue Statistics To Know In 2021, one thing that we know for sure is that apps are a huge part of your daily lives.

Stepping into this market can mean a significant boom in your business.

Even though the data changes in some aspect, the mobile app usage & revenue statistics to know in 2021

favor the idea of app development in its entirety.

If you are holding a great app idea under their hat, the time to act upon it is now. You can use the data mentioned earlier to review the app industry from a downloading and using point-of-view.

If you are ready to build your app in 2021, contact Idea Usher today! Our tech experts will guide you through the entire process and help you create the app that will skyrocket in the market!

To get started, you can catch a glimpse of our portfolio page and see our previous work.

P.s: Did you know that we have a secret surprise for you? It is a free ebook that comprises all the entrepreneurial secrets that you didn’t even know you needed! Tap here!

Prarthna works with Idea Usher under the content creation and marketing department. She follows the motto of Smart Work rather than Hard Work. She combines her research capabilities and conversational tone to write understandable and informative content for her readers