Apps take up a very essential part of our lives in 2021. Research shows that an average smartphone user has more than 80 apps downloaded on their phone.

According to simform.com, it is seen that younger people tend to use apps more than their older counterparts. The age group between 18 to 24 spends over 112.6 hours monthly on mobile apps.

Education and office work has shifted online. This means an increased download of meeting apps such as Google Meet, Zoom, Webex, etc. A similar trend was seen in note-taking apps like Evernote, OneNote, Dropbox Paper, and Simplenote.

Apps such as Evernote and OneNote have an overwhelming 100M+ and 500M+ downloads respectively on Google Play Store alone.

All this data suggests that this might be the most opportune time to build a note-taking app for the market.

Distinguishing Features that You Must Add:

Compared to Evernote and OneNote, apps like Simplenote, and Dropbox paper have way fewer downloads. The latter pair of apps have around 1M downloads.

This huge difference in downloads is primarily due to the features and the overall appeal of some apps over others.

So, what are the features that set apart an app like Evernote from others?

Let’s look at some of the features that you should keep in mind when you build a note-taking app. 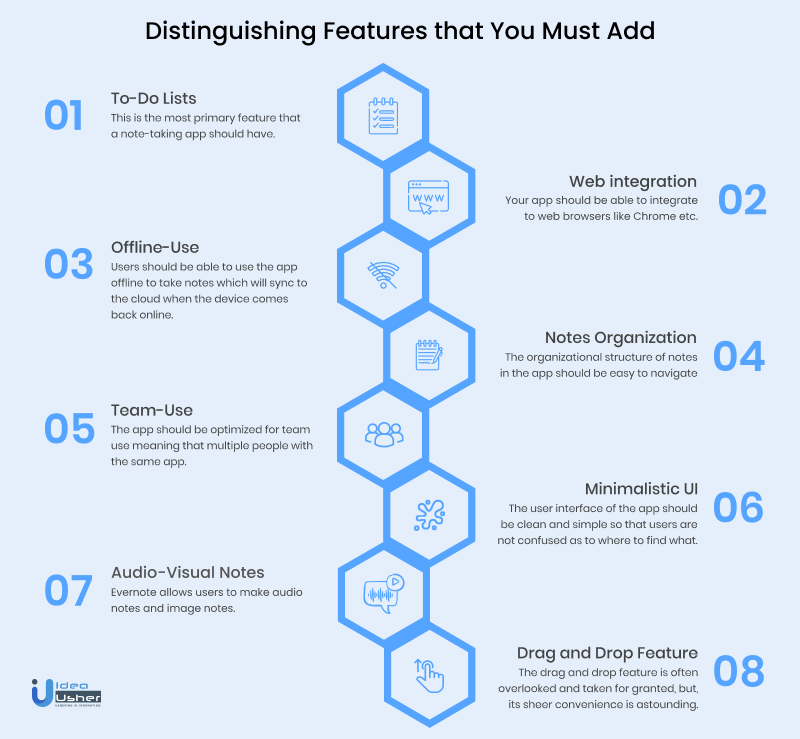 So, now that you have the people and tools that you require, let’s look at how you should apply. 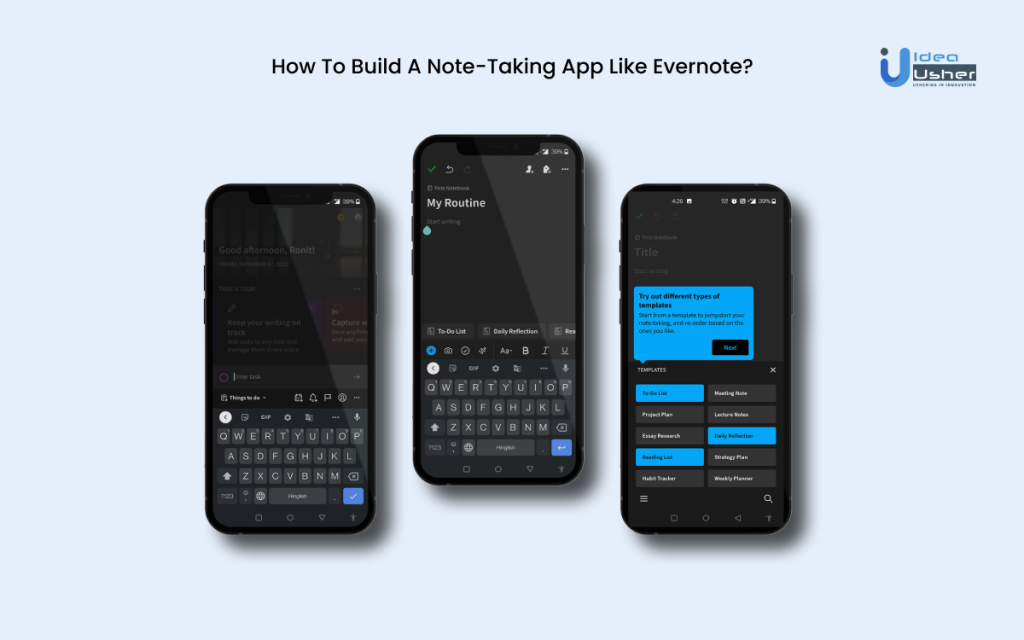 1. Getting The App Designed:

The UI/ UX designers will create a mock-up design for your app. Giving you an idea of what you can expect from the finished product. Any changes that you think should be made, can be first incorporated into this design before it enters the development phase.

You can ask designers to take cues from the existing note-taking apps(Like EverNote, which is a really clean and simple app). You can improve on these designs to make your app appear better.

Even if you want to start the project from scratch, the UI/ UX designers will do that for you without any hassle.

Experienced designers often have a good sense of what users might like or dislike. They can use this knowledge to benefit your project greatly.

Front-end developers are programmers who bring the mock-up to life. It serves as a blueprint for the actual development.

Front-end developers are experienced in languages like HTML, CSS, and JavaScript. This helps them build the face of your app intricately.

Furthermore, the designers and front-end developers can collaborate to create better designs that are more appealing and faster to load.

Evernote offers brilliant APIs that are usable directly. You can put in a lot of features using these APIs/ SDKs.

Some of them are:

Quip APIs offer multiple APIs for various kinds of projects. One of them is a note-taking app. Quip APIs help in the incorporation of rich communication within the notes.

The MyScript interactive Ink SDK or “iink” is an SDK that MyScript offers which is a very intelligent handwriting recognition program.

The iink SDK is not restricted to only note-taking app development. It can handle complex notes too because it supports many advanced content layouts.

Mobile Back-end as a Service and Back-end Developers:

As discussed before the Mobile Backend as a Service provides back-end developers with a way to link their applications with back-end storage. It also offers multiple SDKs and APIs that can be used to create a better app.

Back-end developers are skilled in programming languages like, React Native, JAVA, JavaScript, PHP, etc., and are also familiar with the use of various optimization software like Android Studio.

While hiring a back-end developer, you should keep in mind that they should be able to code both for iOS and Android operating systems.

Here are some of the Evernote note-making templates: 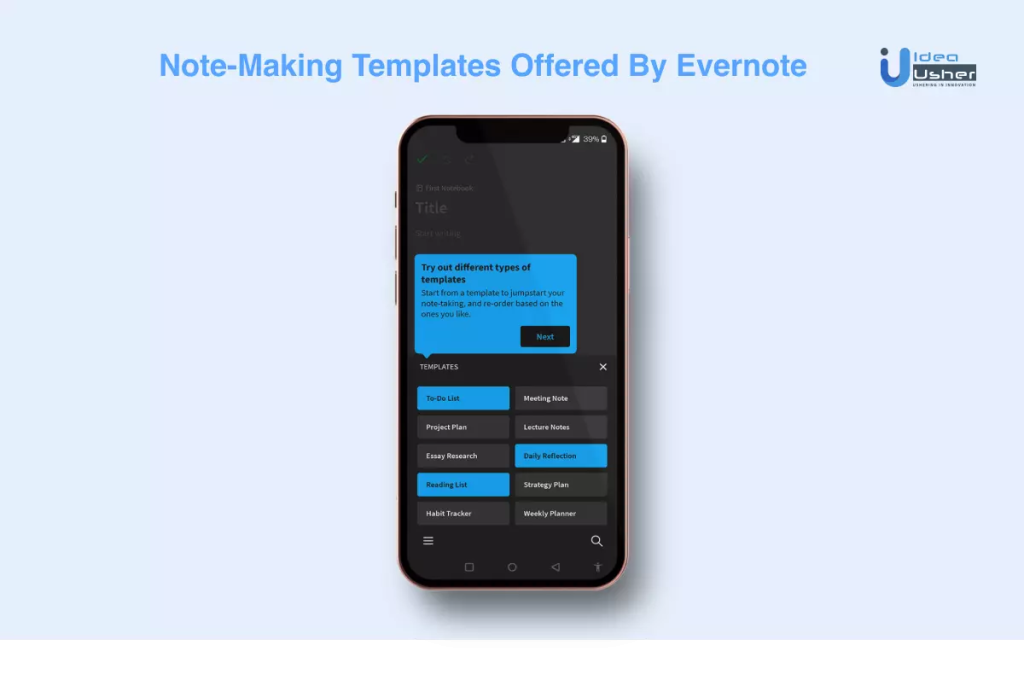 To develop a note-taking app you will require the following:

The list is made keeping in mind all your basic requirements.

Idea Usher has a team of experienced designers, front-end developers, back-end developers, mobile app developers. The team has access to all the necessary tools and resources that your project might require. With a reasonable budget of $7k to $30k, you can develop the best note-taking application. You can contact us if you want to build a note-taking app like Evernote.

Grow Your Business With The Best Marketers

Get your message out with powerful digital marketing

Business Model of The Most Popular Note-Taking Apps:

There are 4 major note-taking apps that are most popular:

Evernote is one of the most popular note-taking apps in both Android and iOS. The features and UI of the app distinguish it from other similar apps.

Evernote has over 100M downloads on Google Play Store and is rated with 3.9 Stars. The 5-star reviews are generally from the people who have opted for Evernote premium.

It clearly shows that the premium version is far better than the free version, making it worth the money.

The freemium model gives access to a limited version of the app to all it’s users for Free. But, it sells feature-added subscription plans to make money.

To build an app like Evernote you must first study the sample app itself. Evernote is free to download on both the Apple app store and Google Play Store. Evernote has 3 subscription plans.

Here is what you get in the 3 plans:

All these features are already discussed in the previous section of this blog. Now that you have an idea of how to earn from your note-taking app, it is time to proceed and look at how you should go about building one.

OneNote is produced by Microsoft. It has over 500M downloads on Google Play Store and is rated at 4.2 stars.

OneNote is rated higher and has more downloads primarily because it is completely free to use. But, how does OneNote make money?

Well, to use OneNote you need to use Microsoft’s cloud storage OneDrive. Free space on OneDrive is limited so, to store enough notes you will need to subscribe to the premium version of OneDrive.

Simplenote has over a million downloads on Google Play Store and is rated 4.2 stars. It’s completely free to use and is made by the most popular web development platform WordPress.org, which is a non-profit.

So, Simplenote is a truly free app.

Dropbox paper has over 1M downloads. And, it is rated 4.1 stars. Dropbox paper is free to use and earns money the same way as OneNote.

It aspires to sell storage space to users. The basic version of the app is free but limited in its storage.

The cost of building a note-taking app can be immense when hiring designers, front-end developers, back-end developers, subscribing to various tools like APIs, SDKs, etc.

In addition to that, making them work together requires tremendous human capital. Plus, if you hire developers, designers, etc. separately. You have to make sure they are compatible with each other and experienced enough to handle a project like this.

Idea Usher has a team of experienced designers, front-end developers, back-end developers, mobile app developers. The team has access to all the necessary tools and resources that your project might require. With a reasonable budget of $7k to $30k, you can develop the best note-taking application. You can contact us if you want to build a note-taking app like Evernote.

Grow Your Business With The Best Marketers

Get your message out with powerful digital marketing

1. How much does it cost to develop an app like Evernote?

If you go with Idea Usher, the cost will range from anywhere between $7k to $30k.

2. Is there an app similar to Evernote?

Google Keep is an app that is very similar to Evernote.

3. Is it cheaper to build an app or a website?

Creating a website is often cheaper than creating an app. However, for business purposes, an app can give you the upper hand.