Find Out What is Wearable app? And Factors Predicting its New Rise

As of 2021, If you’ll look around, earphones with wires are becoming a thing of the past. No one prefers to visit a doctor to get their pulse rate measured when a watch can tell you the time and monitor your heart rate, all of that and more by being at your fist.

The global market for wearable apps is expected to grow at a 15.9% CAGR from 2020 to 2027. (source: grandviewresearch.com). According to another statistic, wearable app user penetration will be 5.3 percent in 2021. It isn’t too late to get the answers for what is wearable app and the applications of wearable technology.

What is Wearable app and Wearable Technology?

In layman terms, users wear technology on their bodies or clothing in the form of wearable devices that connects to the internet (through smartphones, PCs, tablets, etc.). Data is exchanged between wearable apps and the network/device to get work done, monitor and analyse bodily functions, and improve physical performance as one would like.

Currently, smartwatches are the most popular device; seriously, they are everywhere, it doesn’t matter for a show-off or some high tech schedule thing. You can get the idea of their popularity by knowing that their shipments will have risen from 35 million units in 2016 to over 258 million units by 2025.

The thing about smartwatches is that they rapidly became a go-to thing for people.

You can text and check messages, control your device’s sound system, and, most importantly, eliminate the need to take your phone out of your pocket for little things. You are getting top-notch convenience just by connecting your smartwatch to your smartphone. 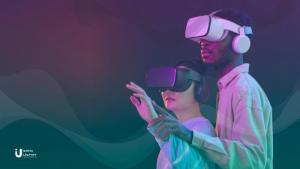 They are worn on the head and provide a display in the user’s field of vision, allowing the user to use the device without having to look down at a phone or smartwatch screen.

HMDs can provide users with various experiences, such as monitors, information placed over reality through augmented reality (AR), or completely immersing the user in virtual reality (VR) setting.

AR and VR both are crucial in driving the wow factor of HMDs. The interest of people is heading towards a better viewing experience. That’s why platforms like Youtube have involvement in promoting this type of wearable technology.

HMDs future scope: According to a report, the HMDs market is expected to grow from $5.5 billion to more than $36 billion at a CAGR of 46%.

New replacements for a pedometer, next on our list is the fitness tracker.

This is generally preferred by those who don’t want distractions of a smartwatch and those who have firm commitments to their health goals.

[Also read: How to create a fitness app]

Developers using wearable technology have found a way to prove that what you wear can make more difference than you think. Imagine wearing pants that guide you to do yoga.

There is a vibrating pant; how funny it may sound, but yes, it helps you do yoga, connected with the wearable X app on your smartphone.

This pant will vibrate your region such as your thigh if the AI notices some flaws in your yoga pose because of your thigh not being at a required angle.

After getting yourself familiar with what is wearable app? And it’s different types. Now you deserve to know how they work?

The products using wearable technology strongly rely on the game of sensors as the data exchanged between two or more devices synced together to provide you with the most productive outcome.

Let’s take an example of a fitness tracker:

One of the biggest successes in this category of app market is the fitness tracker, which tracks your physical activities and your intensity of workouts in the most accurate way possible.

There is a sensor on the backside of the band which tracks your pulse rate. Steps walked, etc. All of it by being at your wrist through a sensor allowing you to track your fitness goals.

Wearables app development can be your gold mine, and research by Salesforce proves it.

Considering business opportunities, wearable app development comes at the top because if you own an app compatible with wearable devices, you certainly have a chance to grow your business faster. 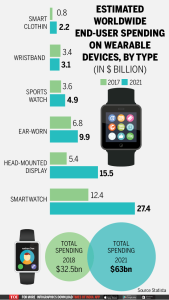 The A players of wearable apps:

It’s the same old story here, too, with Apple dominating the market with 32.2% of wearable shipments overall and right alongside it are giants like Samsung and Xiaomi.

Being the most significant player in the field of wearable devices, the need for an app that is compatible with IOS is more than ever. Even the existing apps reaping fruits of wearable technology like Spotify and Calm are making a good run on Android as well as IOS.

If you are into any business, you must know that product features to drive sales. The same goes here. People are more interested in what they can do with wearable technology rather than what is wearable app?

Listing some features for this category of apps that are skyrocketing their industry in terms of financial gains.

As you can see the rapid growth in this industry, you must be curious about why they are so lit (in social media’s language). I want to mention that the following benefits are not the only benefits users are getting, and there’s more than this.

The wearable app market is expanding rocket speed, making it a growing industry that deserves to be on your watchlist.

The numbers speak for themselves, and if there is any right time in history to step into the market, then it’s these years that we are witnessing new products every day using wearable technology.

The launch of new products and devices happens almost every other day, marking the new era for this category of app development, which is promising and a set of profits placed under the same technology.
As for the app development, the things that you need to look out for, along with attractive UI, easy to use, scalability, etc. is providing data privacy. It is vital to build an app that not only keeps a user happy for a day but for an extended period of time and that only gaining trust can provide.

1. What is wearable app?

Wearable apps are programmed based on wearable technology that allows users to wear the device and perform their tasks more efficiently.

2. Is it the right time to step into the wearable app market?

As Warren Buffet puts it the only time to plant a tree was years ago; the second foremost time is now.

3. Can Idea Usher provide me apps with the latest technology?

Yes! We are happy to inform you that our experience is not limited to a specific category of apps; we can build you the type of app you want. Our developers are experienced and familiar with the latest technology.

Apart from great graphic designers and marketers, we have developers of elite quality that can work on this particular category of app development.